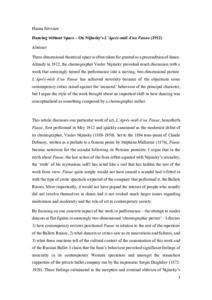 Three-dimensional theatrical space is often taken for granted as a precondition of dance. Already in 1912, the choreographer Vaslav Nijinsky provoked much discussion with a work that seemingly turned the performance into a moving, two-dimensional picture. L’Après-midi d’un Faune has achieved notoriety because of the objections some contemporary critics raised against the ‘immoral’ behaviour of the principal character, but I argue the style of the work brought about an important shift in how dancing was conceptualised as something composed by a choreographic author.