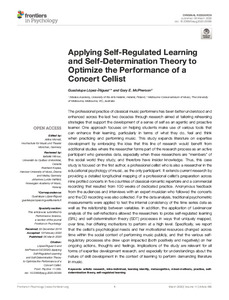 The professional practice of classical music performers has been better understood and enhanced across the last two decades through research aimed at tailoring rehearsing strategies that support the development of a sense of self as an agentic and proactive learner. One approach focuses on helping students make use of various tools that can enhance their learning, particularly in terms of what they do, feel and think when practicing and performing music. This study expands literature on expertise development by embracing the idea that this line of research would benefit from additional studies where the researcher forms part of the research process as an active participant who generates data, especially when these researchers are “members” of the social world they study, and therefore have insider knowledge. Thus, this case study is focused on the first author, a professional cellist who is also a researcher in the educational psychology of music, as the only participant. It extends current research by providing a detailed longitudinal mapping of a professional cellist’s preparation across nine profiled concerts in five countries of classical-romantic repertoire and a commercial recording that resulted from 100 weeks of dedicated practice. Anonymous feedback from the audiences and interviews with an expert musician who followed the concerts and the CD recording was also collected. For the data analysis, traditional psychometric measurements were applied to test the internal consistency of the time series data as well as the relationship between variables. In addition, the application of Leximancer analysis of the self-reflections allowed the researchers to probe self-regulated learning (SRL) and self-determination theory (SDT) processes in ways that uniquely mapped, over time, her differing motivations to perform at a high level. Specifically, we report that the cellist’s psychological needs and her motivational resources changed across time within the social context of performing music publicly, and that the various selfregulatory processes she drew upon impacted (both positively and negatively) on her ongoing actions, thoughts and feelings. Implications of the study are relevant for all forms of expertise development research, and especially for understandings about the nature of skill development in the context of learning to perform demanding literature in music.