From historical materiality to performance : Choreographic functions of the costumes in The Rite of Spring (1913) 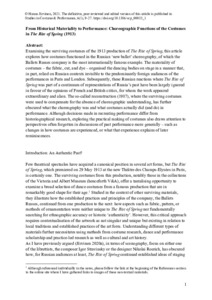 Examining the surviving costumes of the 1913 production of The Rite of Spring, this article explores how costumes functioned in the Russian ‘new ballet’ choreography, of which the Ballets Russes Company is the most internationally famous example. The materiality of costumes ‐ the fabric, cut and dye ‐ organized the dancing bodies onstage in a manner that, in part, relied on Russian contexts invisible to the predominantly foreign audiences of the performances in Paris and London. Subsequently, these Russian reactions where The Rite of Spring was part of a continuum of representations of Russia’s past have been largely ignored in favour of the opinions of French and British critics, for whom the work appeared extraordinary and alien. The so-called reconstruction (1987), where the surviving costumes were used to compensate for the absence of choreographic understanding, has further obscured what the choreography was and what costumes actually did (and do) in performance. Although decisions made in recreating performance differ from historiographical research, exploring the practical making of costumes also draws attention to perspectives often forgotten in discussions of past performance more generally ‐ such as changes in how costumes are experienced, or what that experience explains of later reminiscences.