You Cannot Take War Out of the Soldier 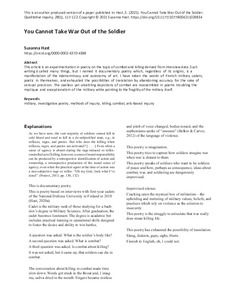 This article is an experimentation in poetry on the topic of combat and killing derived from interview data. Such writing is called many things, but I named it documentary poetry which, regardless of its origins, is a manifestation of the indeterminacy and autonomy of art. I have taken the words of Finnish military cadets, poetic in themselves, and exhausted the possibilities of translation by abandoning accuracy for the sake of sensual precision. The zealless yet unsettling depictions of combat are reassembled in poems troubling the mystique and exceptionalism of the military while pointing to the fragility of the military itself.