Slippage between : a common void 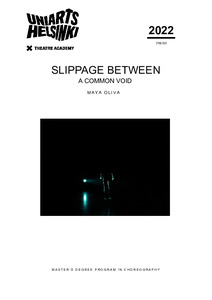 In this written part of my MA thesis, I analyse the artistic process of the performance “I wish I was on planet earth”, premiered on 11.06.2021 at The Theatre Academy in studio 4. I’ve traced a map of sources in relation to it, presented to the reader in a nomadic manner. Through this nomadic movement of associations and transforming from one theme to the other, I question the linear thinking of my writing. Nomadism for me is directly linked with thinking and creating from a place of “in-between”. Rosi Braidotti speaks of nomadism as a state of constant becoming “without becoming anything in particular”. I attempted to write from that space as I have been choreographing from the same in “I wish I was on planet earth”.

After the “introduction as a prologue” chapter, I depart from describing the performance to the reader scene by scene. Then I trace back to a personal experience in New York (2015) and I ponder on how I noticed neoliberalist systems around and “in” me. I wonder how these structures affect me, my way of choregraphing and the dance field in which I operate. In this specific context, I approach neoliberalism from the point of view of André Lepecki. In his book “Singularities”, Lepecki proposes to resist neoliberalism in the dance field using the concept of singularities. He suggests multiple approaches, and I chose the one of limitrophies. I link this to Rosi Braidotti’s view of liminality and nomadism.

During the artistic process of “I wish I was on planet earth”, I wanted to apply these mentioned concepts in the structure of the choreography and in the approach to the collaboration between the dancer, light designer, sound designer, scenographer, and myself. I thought of the space in-between the mediums of dance, sound, light, and scenography. What kind of limitrophe area that place could be, how to inhabit and mostly, how to choreograph it. I found that, to inhabit a space in-between, for me there is a need of constant transformation and adapting, a liminal nomadism. The moment things stopped transforming, they stopped being undefined. I sought for that ambiguity.

Needing to find my own “concrete” link between the mediums of dance, light, sound, and scenography, I chose the route of thinking of electricity and energy being the common denominator between them. Electricity is present in the atoms of my body and electricity can be turned into light and sound. From the point of view of physics, energy continuously transforms. I enter a realm of speculation. I link this idea of electricity/energy to Braidotti’s liminal nomadic, constant becoming “without becoming anything in particular”.

After this section, I dive into the genre of 80s/90s cyberpunk. This being a place of imagination and a genre that speculates on a dystopian future through anarchist approaches. This circles back to my thoughts on how to resist neoliberalism in choreography. I conclude this section by pointing out some critics led by Braidotti regarding the cyberpunk genre, as it does have some negative aspects to mention, such as how the female body is portrayed.

I’ve then decided to present my choreographic methods towards the end of this written thesis, as I wanted the reader to have a certain context prior to that. These methods are directly linked to the topics mentioned and through the work with the performer and working group, I describe how I’ve aimed to choreograph in an in-between, limitrophe and liminal nomadic way.
Finally, I present my concept of common void, which puts a name to the way I have approached choreography in “I wish I was on planet earth” and a manner of thinking that I seek to develop in the future.