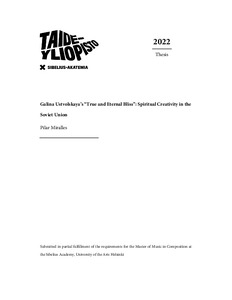 This research project is focused on Galina Ustvolskaya (1919-2006), one of the most freewheeling and singular, yet nameless, paragons of the Soviet generation of composers in the twentieth century. The essay undertakes the analysis of Ustvolskaya’s context and output from the point of view of the spiritual approach that she pointed out as the basis of her creativity throughout her entire career. Spirituality and religiosity constitute a common aesthetic approach of several composers in the context of the Soviet Union during the second half of the past century. Such an aesthetic insight is linked to cultural and historical common realities whose clout upon the specific case of Ustvolskaya will be described as a key factor for the development of her idiom, which reaches a clear culmination in the Second Symphony, “True and Eternal Bliss!” (1979).

The introduction of the project includes a brief approach to the concept of spirituality from the standpoint of its specific subject and featuring several descriptions of the term by different scholars as a reference. Then, the first step consists of a description of Galina Ustvolskaya’s background as a Soviet composer: her historical and aesthetic context, which brings about a stylistic independence that gravitates towards the extremes, taking as a point of departure the most elemental and raw compositional procedures and resources while engendering an innovative expression yet connected to her past, present and future.

Next, the concepts of spirituality and religiosity are described within the historical context of the Soviet Union, focusing on the second half of the twentieth century. The main purpose of this chapter is to explain how the cultural and historical context affected the spiritual and religious insights of Soviet composers, how the Orthodox Church influenced their aesthetic insights, and which place Ustvolskaya occupies within the described reality.

The last step, and kernel of this research project, focuses on Ustvolskaya’s output, described by herself as “true and spiritual, non-religious creativity”, through the analysis of the features of the Second Symphony “True and Eternal Bliss!” (1979). The selection of this piece as one of the works that best epitomizes the spiritual approach of the composer will be justified, although displaying as well the challenges that such a choice poses while holistically assessing Ustvolskaya’s repertoire. The study of the aesthetic traits will be based on their categorization into two different levels of aesthetic clout: the temporal level, related to the historical and cultural time and place where her activity was developed; and the spiritual level, related to her own abstraction and her individual perception and assimilation of reality. The foremost features of the Second Symphony are subsequently examined in detail, after an overview of the overall aesthetic approach, including the study of the text, its origin, content and meaning, the relationship with the concept of the prayer, the structure and the motivic content of the piece emphasizing the importance of repetition, the temporal perception, and the three last direct analogies between the qualities of her idiom and several specific religious or spiritual realities: the concept of the icon, the ritualistic behavior and the influence of the old Russian singing tradition of znamenny raspev.

A conclusion undertaking a personal interpretation of the consequences of Ustvolskaya’s tendency towards an extreme expressivity throughout her output puts an end to the whole project, including proposals for further research and discussion. As an annex to the research paper, the complete structural analysis of the Second Symphony is disclosed in a chart.