Veridical and Schematic Memory for Harmony in Melody-and-Accompaniment Textures 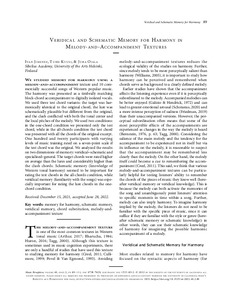 We studied memory for harmony using a melody-and-accompaniment texture and 10 commercially successful songs of Western popular music. The harmony was presented as a timbrally matching block-chord accompaniment to digitally isolated vocals. We used three test chord variants: the target was harmonically identical to the original chord, the lure was schematically plausible but different from the original, and the clash conflicted with both the tonal center and the local pitches of the melody. We used two conditions: in the one-chord condition we presented only the test chord, while in the all-chords condition the test chord was presented with all the chords of the original excerpt. One hundred and twenty participants with varying levels of music training rated on a seven-point scale if the test chord was the original. We analyzed the results on two dimensions of memory: veridical–schematic and specialized–general. The target chords were rated higher on average than the lures and considerably higher than the clash chords. Schematic memory (knowledge of Western tonal harmony) seemed to be important for rating the test chords in the all-chords condition, while veridical memory (familiarity with the songs) was especially important for rating the lure chords in the one-chord condition.