Beyond the Playlist: Commercial Radio as Music Culture 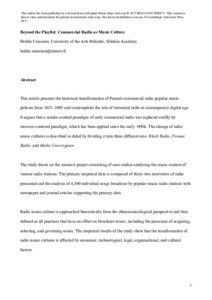 This article has been published in a revised form in Popular Music https://doi.org/10.1017/S0261143017000071. This version is free to view and download for private research and study only. Not for re-distribution or re-use. © Cambridge University Press 2017..

This article presents the historical transformation of Finnish commercial radio popular music policies from 1985–2005 and contemplates the role of terrestrial radio in contemporary digital age. It argues that a sender-centred paradigm of early commercial radio was replaced swiftly by receiver-centered paradigm, which has been applied since the early 1990s. The change of radio music cultures is described in detail by dividing it into three different eras: Block Radio, Format Radio, and Media Convergence. The study draws on the research project consisting of case studies analysing the music content of various radio stations. The primary empirical data is composed of thirty-two interviews of radio personnel and the analysis of 4,500 individual songs broadcast by popular music radio stations with newspaper and journal articles supporting the primary data. Radio music culture is approached theoretically from the ethnomusicological perspective and thus defined as all practices that have an effect on broadcast music, including the processes of acquiring, selecting, and governing music. The empirical results of the study show that the transformation of radio music cultures is affected by economic, technological, legal, organisational, and cultural factors.