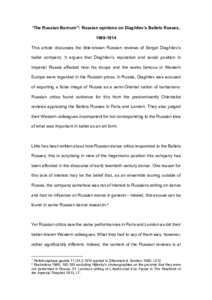 This article discusses the little-known Russian reviews of Sergei Diaghilev's ballet company. It argues that Diaghilev's reputation and social position in Imperial Russia affected how his troupe and the works famous in Western Europe were regarded in the Russian press. In Russia, Diaghilev was accused of exporting a false image of Russia as a semi-Oriental nation of barbarians.
Russian critics found evidence for this from the predominantly Orientalist reviews appraising the Ballets Russes in Paris and London. They also judged their Western colleagues incompetent for not corresponding to the Russian idea of what was important in ballet as an art form.