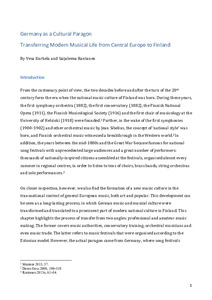 From the customary point of view, the two decades before and after the turn of the 20th century form the era when the national music culture of Finland was born. During these years, the first symphony orchestra (1882), the first conservatory (1882), the Finnish National Opera (1911), the Finnish Musicological Society (1916) and the first chair of musicology at the
University of Helsinki (1918) were founded.1 Further, in the wake of the first symphonies (1900–1902) and other orchestral music by Jean Sibelius, the concept of ‘national style’ was born, and Finnish orchestral music witnessed a breakthrough in the Western world.2 In addition, the years between the mid-1880s and the Great War became famous for national song festivals with unprecedented large audiences and a great number of performers:
thousands of nationally-inspired citizens assembled at the festivals, organised almost every summer in regional centres, in order to listen to tens of choirs, brass bands, string orchestras and solo performances.3

On closer inspection, however, we also find the formation of a new music culture in the transnational context of general European music, both art and popular. This development can be seen as a long-lasting process, in which German music and musical culture were transformed and translated to a prominent part of modern national culture in Finland. This chapter highlights the process of transfer from two angles: professional and amateur music
making. The former covers music authorities, conservatory training, orchestral musicians and even music trade. The latter refers to music festivals that were organised according to the Estonian model. However, the actual paragon came from Germany, where song festivals with huge numbers of participants formed an important part of the German national movement since the 1820s at the latest.

In this grand narrative German musical culture appears as the primus motor, irresistible model according to which local musical life was organised. In Finnish society in general, Germany and German culture were highly esteemed at the turn of the 20th century, and the strong cultural and economic influence from Germany to Finland did not weaken until the end of the Second World War. This relation had a long history. The roots of Finland’s affinity for
German culture go back several hundreds years into cultural history, to the medieval urban cities that developed around the Baltic Sea and, thereafter, the Lutheran Reformation. Finland was an eastern part of the Kingdom of Sweden and local clergy and academics had close ties to the centres of learning in northern Germany for centuries. In the early 19th century, Finland parted ways with Sweden but the connections to Germany remained and were further
strengthened in the 20th century: German was the most studied foreign language in secondary schools, and before the Second World War, half of the guest lecturers at the University of Helsinki came from Germany, which at the time was the leading nation not only in philosophy and humanities but also in modern natural sciences.4

In the arts, ties to Germany were particularly strong in the area of music, and they were further reinforced when modern musical life based on a continental model began to emerge around the turn of the 20th century. This was when the foundation was laid for Finland’s current music education system, network of symphony orchestras as well as music trade and publishing. However, it is important to keep in mind that German influence was by no means
limited to art music. Around the same time, urban and continental popular music – operetta and varieté – also arrived in Finland.5 The flow of influences and imports, often directly from Germany, was so strong that we could reasonably describe this process as the Germanification
of Finnish music.