Bodily States on Screen: Gendering Spheres of Influence in House of Cards 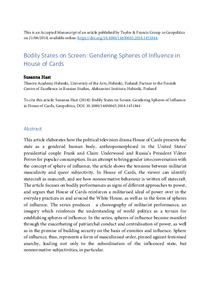 This article elaborates how the political television drama House of Cards presents the state as a gendered human body, anthropomorphised in the United States’ presidential couple Frank and Claire Underwood and Russia’s President Viktor Petrov for popular consumption. In an attempt to bring gender into conversation with the concept of sphere of influence, the article shows the tensions between militarist masculinity and queer subjectivity. In House of Cards, the viewer can identify statecraft as mancraft, and see how nonnormative behaviour is written off statecraft. The article focuses on bodily performances as signs of different approaches to power, and argues that House of Cards reinforces a militarised ideal of power over in the everyday practices in and around the White House, as well as in the form of spheres of influence. The series produces a choreography of militarist performance, an imagery which reinforces the understanding of world politics as a terrain for establishing spheres of influence. In the series, spheres of influence become manifest through the exacerbating of patriarchal conduct and centralisation of power, as well as in the premise of building security on the basis of enmities and influence. Sphere of influence, thus, represents a form of masculinised order, pinned against feminised anarchy, leading not only to the subordination of the influenced state, but nonnormative subjectivities, in particular.