Imagining what it is like to be you : challenges of a hybrid community 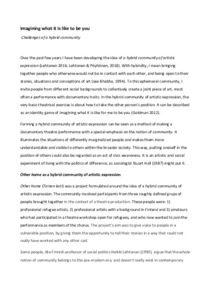 Over the past few years I as theatre practitioner and scholar have been developing the concept of a hybrid community of artistic expression (HCAE).
This community includes people from different backgrounds who collectively create a joint piece of art. These are individuals who would not spend time together otherwise. The community aims to call attention to the stories of marginalised or stigmatised people, fostering change by making these experiences understandable to a larger audience. It also seeks to provide it’s members with the opportunity to participate in the public discourse through the medium of art.
The Other Home project of The Finnish National Theatre is an example of this kind of a community. It included participants from three groups: 1) artists who sought asylum in Finland in 2015 2) artists with background in Finland 3) non-artist asylum seekers who had participated in an open workshop led by the project. The final product is a kind of documentary theatre: the production tells not just the stories of the community, but also the imagined stories of the community it considers itself to be. A key role comes when the community presents its production to the audience, as the ticketholders become a part of both the community and its final product by contributing their own unique input.
The activities of a HCAE are politically charged in many ways. The Other Home community contained members that fought on opposing sides of civil wars in Syria and Iraq. It was a big challenge to make these people do art together. Politics was also present with regards to the unresolved asylum applications of many members of the community. Over the course of the project, both positive and negative asylum decisions were handed down. Further tensions in the community included conflicts between males and female, the young and old and the group’s professionals and amateurs. HCAE is an imagined community that perpetuates a vision of its inner sameness while also being aware of the phenomena that cause its members to be different. This is part of the community’s performance and self-narrated story.