Queering the ghosts of typicality : the disruptive potential of Fabian Ludueña's philosophy 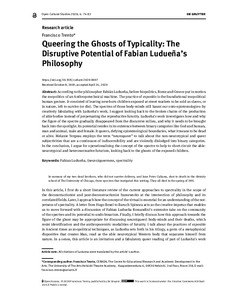 According to the philosopher Fabián Ludueña, before biopolitics, Rome and Greece put in motion the zoopolitics of an Anthropotechnical machine. The practice of expositio is the foundational zoopolitical human gesture. It consisted of leaving new-born children exposed at street markets to be sold as slaves, or in nature, left to survive (or die). The spectres of those body-minds still haunt our onto-epistemologies: by creatively fabulating with Ludueña’s work, I suggest looking back to the broken chains of the production of able bodies instead of perpetuating the reproductive futurity. Ludueña’s work investigates how and why the figure of the spectre gradually disappeared from the discursive milieu, and why it needs to be brought back into the spotlight.
Its potential resides in its existence between binary categories like God and human, man and animal, male and female. It queers, defying epistemological boundaries, what it means to be dead or alive. Melanie Yergeau employs the term "neuroqueer" to talk about the non-neurotypical and queer subjectivities
that are a continuum of indiscernibility and are violently dislodged into binary categories. In the conclusion, I argue for operationalising the concept of the spectre to help to short-circuit the ableneurotypical and heteronormative futurism, looking back to the ghosts of the exposed children.