"Oops!" in public space : lapse as tool for social and political organization 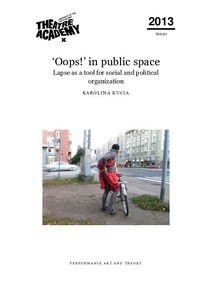 Oops! Sorry, later just Oops! was a group practice of micro-events and animation for 4 persons that took place in 2009 in the public spaces of Helsinki. It was also staged as a performance production and presented at the Theatre Academy in November 2010. The entire process was circling around a situation of lapsus (a lapse, slip, faux pas). We used lapsus to experiment with cooperation, which is not based on sympathy or consensus. I chose lapsus for its sensual-emotional complexity and immediacy, to be an occasion for alternatives in self-organizing and collective co-emergence. I chose to do research, not through affirmation of any exact alternative or potentiality of alternative, but by inhabiting a state of disruption. I asked people who share my affection for moments of lapse or ones to whom those moments happen frequently to join the project. We were working through combining mechanical and organic processes of dialogue, exchange and production. Methods and tools used in this practice were: lapse, parody, mockery, inconsistency, reanimation and personal resistance. The main reason to initiate this research was to try out a process that would embrace a condition of fuzzy, fractalized and flexible precarious work structure in cognitive production with its possible collapses. As an event producer in an age of commodification of time, experience and event I decided to play with this structure and to invite a lapsus as a moment of disruption; to see how do we get out from there. Does a collapse produce stiffening or a reinvention of the norm? I see in a lapse an everyday practice of letting go of self-control. Letting go of the constant creation of my face, body and personality as something to be looked at. Letting go of one's own desire to look good. The event of a lapse never fails me. It always works. It always disrupts the consistency of emotions, production, play, drama and interpretation. I believe in tools that are not pretty. A lapse is anti-aesthetical. It disrupts aesthetics, any order and any structure of representation and meaning. In the written part of my thesis I write about the conceptual base for the Oops! project. The concept of Oops! relates mainly to Giorgio Agamben's idea of parody and it's coexistence with fiction, Paolo Virno's concept of joke as a diagram for innovatory action in public, Félix Guattari's minor notions of lapse in Chaosmosis, and Richard's Schechner's idea of dislocation (not-not-me) relating again with Agamben's concept of remnant. Through this theoretical background I try to make sense and formulate my idea of lapse as a fallacy, micro collapse and minor event of the every day, a momentary state of dealing with the possibility of becoming both, a joke or a failure. After that I depict what we intended to do with Oops! the plan I wrote before we started to work and during the practice. This part contains a description of the background for the work and the research, how did the group come together and how did it sustain itself for the period of the work. I also describe my main method of working, the method of reanimation and how I have created this sort of prosthesis to deal with the documentary results of live action and with the live action producing documentary results. Following that I talk about what actually happened in the process of Oops! I concentrate on the most interesting points. I describe the end result, the performance, and point out what was interesting in what we did and what I have found out conceptually and practically. I refer to Franco “Bifo” Berardi's writings on automatism, virtual time and the social consequences of increasingly immaterial labor, and describe surprises, reflections, touching moments and some tools or techniques developed and ready to be carried on. At the end I draw some conclusions and present a short plan for my next attempt to work with lapse; as an appendix I am attaching the script for Oops!, a collection of concepts, scores and structures we followed on the way. Throughout the entire text I relate to other artistic projects beside our Oops! project. In the case of the question of parody I refer to the piece by Jeremy Deller, Battle of Orgreave and the documentary of this work by Mike Figgis, both from 2001, also to a work by Yael Bartana from 2011, And Europe will be Stunned and to the film Attenberg from 2010, by Athina Rachel Tsangari. When talking about the method of reanimation and lapse I refer to Martin Arnold's Passage à l'acte from 1993, Jeremy Deller's piece again, my own previous works and Joan Jonas' pieces, Vertical Roll, 1972 and Reanimation, 2012.