Poetic encounter : a hermeneutic journey into the microprocesses of performance art 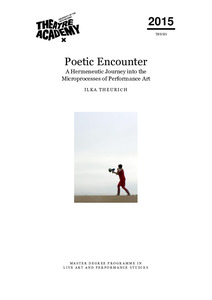 This scientific work concentrates on the question: How do relations between elements have to be set up so that a poetic encounter in public urban space can emerge? This thesis is based on two practical research projects Kallio my Kallio at the Theatre Academy Helsinki (held between 15th March and 15th May 2011) and The City of Dream and Futureii at Space MASS in Seoul (held between 1st September and 27th November 2011).
Two answer the research question I examined also the following questions in this text: how does the recipient encounter performance art in public urban space and vice versa? How do people encounter poetic moments?
When does such a moment start, when does it end? What is a poetic moment? Does one have to be prepared for such a moment in order to be able to see it? My first approach in this thesis is that of perception.
For me perception as a ground and starting basis of all cognition finds its true supreme discipline in artistic research.
My second approach is intervention as it is discussed under the term action in chapter two. I have defined this free space that is to be designed as a space of poetic encounter in chapter three.
For this, I use a social-poetical performance practice as a design tool, which I would like to introduce here as a contribution to the discussion on the way to a possible open city.
This thesis investigates visual prerequisites, eephemeral phenomena that enable a poetic encounter in public space to emerge and to be reflected in the mode of playing. I have tried to figure out that through serious play an energetic space will be constituted in the streets of a district and that bymeans of this energetic space, the passers-by will get one more possibility to read the action. Based on my personal belief that each human being is insular and cannot get out of that insularity, but that there are strog moments when somewhere finds an intersection with someone else, when an idea of something enters the space, poetic encounter is possible in any situation and for anyone. You do not have to be prepared for such a moment, to encounter.