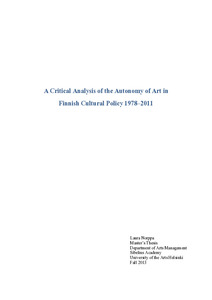 The use of art for the purpose of attaining extra-artistic aims has increased during the last decades. Moreover, discourses of economic origin have entered the artistic realm bringing forth increasing instrumentalist objectives. Art is prompted to constantly justify its existence. Measurable results, evidence of benefits and requirements of efficacy become naturalized features of the field of art. This study seeks to explore what is happening to the autonomy of art in this course of development?

Within a critical framework the aim of this study is to examine the autonomy vis-à-vis the instrumentalism in terms of Finnish cultural policy from 1978 to 2011. The analysis is conducted with data consisting of cultural policy reports from 1978, 1993 and 2011. Critical theory and particularly theories concerning the autonomy of art developed by Theodor W. Adorno constitute the theoretical framework of the study. As its methodology, this study adopts a qualitative and interdisciplinary research approach, deploying both content and critical discourse analysis. Further, in the spirit of a critical and reflexive research orientation, this study seeks to examine latent phenomena and structures that without thorough examination may remain uncovered.

One of the central arguments of this study is that the increasing economic forms of instrumentalism are mainly a result of neo-liberalism. As a societal ideology starting to prevail in the 1990s, neo-liberalism has influenced cultural policy to a direction that puts increased emphasis on the economic and social benefits of art, making the approach towards art almost exclusively instrumental. This study claims that even though cultural policy has always been instrumental in its relationship towards art, the forms of instrumentalism that has emerged during the late 20th century are to a wider extent than before a threat to the autonomy of art.