All the people's sorrow : making a concert of laments 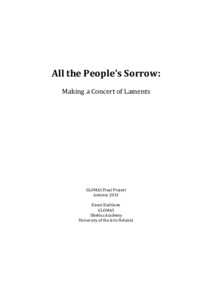 All the People`s Sorrow. Making a Concert of Laments is a final project for the Global Music Master (GLOMAS) studies. It consists of two parts: written work and a concert called Kaikkien kansojen murhe - All the People's Sorrow, which was held on 2nd of May 2013 in Helsinki.

In the beginning of the written work I introduce the history of the laments and the research of them. Laments are a global phenomenon that can be found all over the world among very different kind of cultures. Already ancient Greeks knew laments. Laments were sung in the parting situations and also in the most important rites of human life like marriage and death. In the Balto-Finnic area there were also laments of conscript and occasional laments. In my work I have concentrated in the Karelian and Ingrian traditions. The language in them is special and the melody and the rhythm vary all the time because of the free meter of the lyrics.

I did not find it always easy to make music of a tradition that has faded. I searched for theories of recovering an old tradition. In the 1960`s the ethnologists defined to term folklorism to describe tradition that was modified for new purposes. Folklorism was seen among the ethnologists as a threat to the real folklore. In 1990 researcher Lauri Honko developed the theory of folklore process. Honko sees that the folklore is always in a process and he divides it in 22 parts. The first 12 parts are part of the first life of folklore and the rest 10 parts are part of the second life of folklore. This theory sees all the parts of the process equal. Anna-Liisa Tenhunen created for her doctoral study also a third life of folklore, and used it in particular with laments.

One part of the written work is to describe my own process with the concert Kaikkien kansojen murhe - All the People`s Sorrow. I tell about my repertoire and how I worked with it. I did not grow up in the environment were laments would have existed so I needed to learn a new culture. In the concert I wanted to approach the laments from different sides: some of them I learned from archive recordings, I composed melody to a lament text, I wrote my own lament and I also improvised laments. Beside Karelia and Ingria I also prepared material from Finland, Persia, Kosovo, Estonia and Russia. I had a group of ten musicians who helped me with the concert. I found a new way to express myself as a musician and also had an experience of a concert that touched both the audience and the performers. In the end of the work I summarize what I have learned and look to the future.