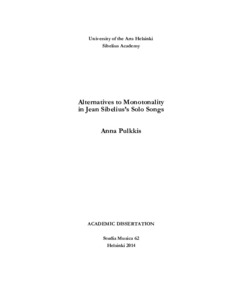 This study examines the ways in which Jean Sibelius's (1865-1957) solo songs depart from monotonality. The definition of monotonality in this study rests on Schenkerian theory and includes a monotonal composition featuring a single main key that governs both the beginning and end of the composition, as well as the structure of a monotonal composition based on a prolongation of the tonic of the main key. Monotonality was the ruling principle in tonal music of the common-practice era, but in the 19th century, composers began conceiving structures where the alternation or tension between two or more keys, or harmonic centers, played a structural role. This study views Sibelius as part of this expression of the Late-Romantic tradition.

Of Sibelius's 81 surviving opus-numbered solo songs, 21 depart from monotonality; these songs form the repertoire of this study. The structures of Sibelius's non-monotonal songs feature different types of non-monotonal harmonic organization: tonal pairing (two harmonic centers alternate or compete), directional tonality (one harmonic center governs the beginning, and another, the end), and wandering/episodic tonality (different harmonic centers appear in succession, often with a block-like approach to form). Sibelius's applications and combinations of different types of non-monotonal harmonic organization yield a variety of alternatives to monotonality in his oeuvre of solo songs.

As products of the late 19th and early 20th centuries, Sibelius's songs include harmonic progressions that follow no functional or prolongational logic. This study approaches the songs from the viewpoint of a double syntax that includes classical (functional and diatonic) harmonic syntax and pan-triadic harmonic syntax. Pan-triadic syntax rests on the voice-leading properties of consonant triads and views them against a chromatic framework. Two pan-triadic phenomena, retained tones in structural harmonies and large-scale transposition, have particular significance for the shaping of non-monotonal structures in Sibelius's songs. Sibelius's non-monotonal songs also contain modal elements, which provide a third syntactic dimension.

The background structures of these non-monotonal songs do not follow Schenkerian principles, yet Schenkerian analysis is applicable to those middleground harmonic progressions that follow classical syntax. For pan-triadic elements, this study adopts a transformational approach that draws from the Neo-Riemannian tradition. Modal elements are approached from scalar and harmonic viewpoints that derive from different impulses behind Sibelius's modal practice.

This study is divided into two parts, Background and Analysis, framed by an Introduction and an Epilogue. Because the present study is the first to approach Sibelius's music from the non-monotonal viewpoint, and because pan-triadic and transformational ideas are unfamiliar in the literature on Sibelius's music, the Background part of this study discusses these issues thoroughly. The analytical chapters are organized based on the different principles that guide the structures of Sibelius's non-monotonal songs. Detailed analyses examine 13 of Sibelius's 21 non-monotonal songs, while the remaining 8 songs and a number of borderline cases are discussed more briefly. Each detailed analysis ends with considerations of the relationship between the music and the poetic text.