Attracting new audiences : attitudes and experiences in attending classical music concert of students in their twenties 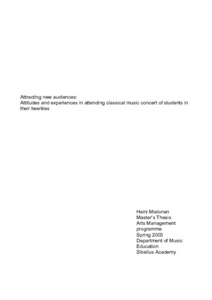 The object of the study was thus to find out why young university students who could, according to studies, be potential attenders of classical music concerts but are not currently attending. The aim was to study issues that could be thought to influence the attending willingness such as attitudes, experiences, values, life cycle and life-stye related issues. These areas served as a theory part in the study. Also, previous audience research studies were an important source of background information.

The method used was a case interview, where seven university students living in Helsinki (20-31 years old) where interviewed before the classical music concert and after the concert. The interview was carried out as a group interview and the participants were asked questions that followed specific themes that were thought to reveal information about their attitudes and experiences. The interview took place at Finlandia Hall.

The purpose of this study was primarily to describe the phenomena of the societal changes and their influence on the classical music concert audiences. However, the major findings of this study could give some new ideas how to better attract younger audience to the concerts. The findings could also help organisers and organisations in using more efficient marketing tools when trying to get young audience. Also, the study discusses the role of the educational programmes in finding young people to the audiences. In the end, there are given some pragmatic improvement ideas for the organisations as well.