Brecker and Patterns : an analysis of Michael Brecker's melodic and instrumental devices 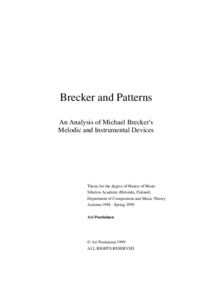 Only a few scientific studies or articles exist on Michael Brecker's improvisational style. The present work approaches Michael Brecker's style through a detailed analysis of his solos in the compositions "Straphangin"," Nothing Personal", and "Peep". The approach to the analysis is similar that which jazz musicians use themselves. The analysis is based on selected audio material and transcriptions. David Baker's "Giants of Jazz" series was applied as a model for the form of the study. The applied theoretical framework of contemporary jazz improvisation is based on David Liebman's "A Chromatic Approach to Jazz Harmony and Melody", and various other resources.

In this study, the aim was to define and describe certain melodic and instrumental devices which are characteristic of Brecker's expression. In the analysis, attention was given to the melodic devices which are based on the diminished, altered, pentatonic, and augmented scales, and on the superimposed "Giant Steps" chord progressions. For the instrumental devices, the focus of the analysis was on alternate fingerings, multiphonics, and fingering mannerisms. The use of these devices was divided into functional and non-functional. Some of the devices and their usage could not be discussed deeply enough in the three solo analyses alone, and further examples were therefore traced from Brecker's other performances.

Through the analysis it was discovered that most of the chosen devices appear as patterns. The patterns which are based on the aforementioned melodic and instrumental devices define a characteristic part of Michael Brecker's melodic vocabulary. In addition to the discussion of such devices, some additional comments were made about Brecker's chromaticism and his playing inside the changes.