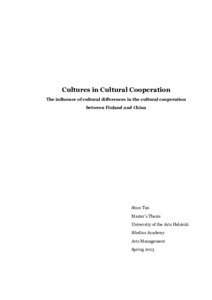 Finland and China have greatly enhanced their bilateral cooperation in the cultural field since the Shanghai World EXPO 2010. By now, as China becomes more and more culturally open to the world, the future of the Sino-Finnish cultural cooperation is believed to be promising as well.

This research probes the Sino-Finnish cultural cooperation from a cultural perspective, in which not only the Finnish and the Chinese cultures are analysed and compared, but the influence of the cultural differences in the cooperation are also evaluated and studied. Furthermore, feasible solutions to the cultural clashes are summarized with the hope of guiding the western arts managers make practical strategies.

It is revealed that Hofstede's four cultural dimensions are detectable in the Sino-Finnish cultural cooperation, although they are not fully in consistence with the theoretical measurement in the scale of difference-making. Besides, five aspects which can be affected by the cultural differences in the course of the cooperation are generalized from the collected cultural issues.

In addition to the empirical findings, questions on the national culture dimension theory are also raised as an attempt to stimulate further discussions on how to perceive the East and the West from a broader and deeper view particularly in the realm of arts management.