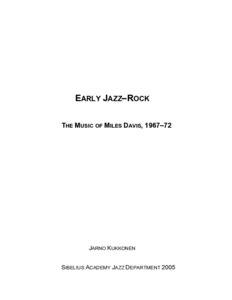 This study examines various aspects of Miles Davis's music, the main subject being his jazz–rock phase between years 1967–72. On the macro level, I describe the study materials: Davis's recordings. From there I proceed to the micro level, analyzing selected pieces in greater detail. I explain Davis's renewal of the jazz tradition through his introduction of musical elements previously considered anomalous to jazz. From among these elements, I look for those that created coherence in Davis's early jazz–rock phase. The enclosed tables illustrate these elements and their appearance in Davis's music chronologically. I have also attempted to define the term jazz–rock and categorize certain pieces in Davis's repertoire.

Much of Davis's recorded music of the period was released as extended suites under generic titles without naming the separate movements that made up each entity. Besides examining the complexities involved when identifying Davis's pieces, this study illuminates the reoccurrence of certain musical motifs throughout several works and demonstrates how Davis reshaped others' compositions to suit his preferences, for example by omitting sections and simplifying their harmonic content.

The study shows that Davis gradually developed an approach to music that favored rhythm, interaction and tone color over harmony and melody; he eventually abandoned harmony and song forms as they are traditionally understood. Davis's way of making music was a process in which each performance created unique musical forms. As a jazz soloist he developed a strong rhythmic expressiveness that overshadowed any underlying harmonic content.

Transcriptions of the music studied are included