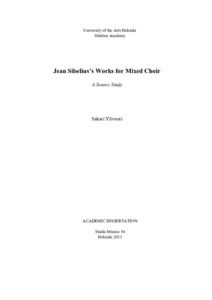 Jean Sibelius (1865-1957) composed choral music throughout his entire active career. The earliest mixed-choir works date from his period of study at the Helsinki Music Institute (probably from 1888 or 1889) and the last work for mixed choir is a setting of his Finlandia-hymni dating from 1940. In total, Sibelius's mixed-choir oeuvre consists of 30 works.
The objective of the present study is threefold: firstly, to gather all the sources for the 30 mixed-choir works; secondly, to analyse the source material and to construct source chains; and thirdly, to study Sibelius's writing process and the evolution of each mixed-choir work from their earliest sketches to present-day editions.

The source material is divided into two groups: musical sources and biographical sources. The main focus lies on the musical sources. Chronologically, the musical sources form three categories: manuscripts, contemporary editions, and posthumous editions. Manuscripts include sketches, drafts, autograph fair copies, fair copies by people other than Sibelius (if used in the publication process), proofs, and Handexemplare. The dividing line between contemporary and posthumous editions is the year of Sibelius's death (1957). The biographical sources consist of Sibelius's diary, correspondence, and work lists. The study also consults newspaper reviews, as well as other sources when they shed light on the dating of the works in question.

The analysis of the source chains aims to map the evolution of Sibelius's mixed-choir works. The theoretical foundation of the analysis is based on the methodology of Genetic Criticism (critique génétique). Genetic Criticism does not seek to establish one definitive or singular version of any given work, but rather focuses on the study of the writing process. As a deviation from traditional Genetic Criticism, the present study does not limit the source chain to manuscript sources, but also considers published editions, including present-day editions. Each source - be it a sketch, fair copy, or a modern edition - is considered an equal representation of a stage in the work's evolution. Thus, the analysis is not restricted to Sibelius's writing process, but rather it also aims to describe how the works have evolved during their existence.