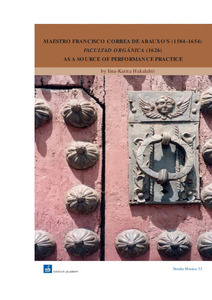 I regard Francisco Correa de Arauxo as the most important composer of organ music of seventeenth-century Spain. Besides having been renowned organist at the Sevillian Church of San Salvador, the Jaén Cathedral, and the Cathedral of Segovia, Correa was a teacher and a significant writer on issues of music theory and performance conventions. His Facultad orgánica of 1626 involves sixty-nine compositions plus pedagogical and theoretical writings in the form of an extensive foreword and preambles written to compositions. Despite the undisputed importance of Correa's book, it has been studied surprisingly little - and even less from the angle of performance practice.
My research belongs to the field of study on performance practice of early Spanish keyboard/organ music, its main focus being on Correa's advice on different elements of performance considerations. Additionally, upon studying Correa's book, one encounters some issues connected with performance that the author of the Facultad does not comment on himself (e.g., the 3+3+2 rhythm and rules of musica ficta). I examine the following elements of performance in the present study: 1) glosas (diminutions) and adornos (ornaments); 2) fingerings; 3) tempo, time signatures and proportions; 4) special rhythmic features (ayrezillo, most importantly); 5) registration; and 6) musica ficta.
Besides the main purpose of research - of gathering and analyzing the performance considerations involved in the Facultad - I present updated facts about Correa's life and professional career, situate the Facultad and its author in their historical context, introduce Correa's central theoretical concepts and discussions (including the cifra tablature), and give a brief account of local Spanish organ types and of the general lines of development of the historical Spanish organs. In addition to the above-mentioned research objectives, I aim at demonstrating that Correa, with his Facultad, was an important renovator of style and a great advocate of a particular compositional type, the tiento de medio registro, for divided registers. My research results include a list of the currently known exemplars of the Facultad orgánica and their location.
The theoretical framework of my study is the philosophical hermeneutics of Hans-Georg Gadamer, whose Wahrheit und Methode [Truth and Method] (1960) is a fundamental work of philosophical hermeneutics of the twentieth century. In regard to Correa's compositions, I have used an analytical approach supplemented by an "experimental" approach - stemming from my experience as an organist and as a performer. I have applied a historical approach to considering Correa's theoretical and pedagogical texts, the emphasis being on the history of musical styles, of music theory, and of the history of keyboard instruments. (In situating Correa and his book in their historical context, I have taken advantage of an occasional micro-historical touch.)
Upon completing my research on Correa's Facultad orgánica, I have become convinced of its significance as a work which reflects performance practice of Spanish organ music of the early seventeenth century at various levels and which involves - in relatively great abundance - maestro Correa's pieces of advice, which are useful and of interest to today's performers of his tientos or of pieces by other Spanish/Iberian composers of his time.