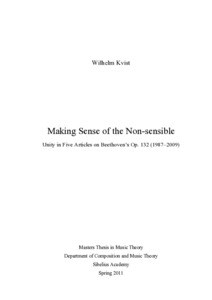 The aim of the present study was to explore how the concept of unity has been addressed in five musicological or music-theoretical articles on Beethoven's Op. 132, first movement, published between 1987 and 2009. The five articles or book chapters analysed were written by Kofi Agawu (1987/1991), Robin Wallace (1989), Daniel Chua (1995), Susan McClary (2000) and Frank Samarotto (2009). All texts were representative of different analytical traditions. The texts were analysed in their own methodological context, but juxtaposed under four rubrics: unity of surface, unity of form, unity of subsurface and motivic unity. The results showed that even if the five writers considered the work disunified on one level, they discovered unity on another. If the surface was seen as irrational, the subsurface level granted relative coherence. If theoretical constructs on the subsurface level were seen as disruptive and incomplete, their alleged familiarity served to guarantee perceptual significance. And if the form was seen as ambiguous, identifying certain formal blocks and labels was considered to be of secondary importance. Of primary importance was that process itself had been thrown into confusion. Morgan's (2003) call for an analysis showing that the disunity itself is meaningful was answered by Wallace who suggested Beethoven's composition is deliberately ambiguous.