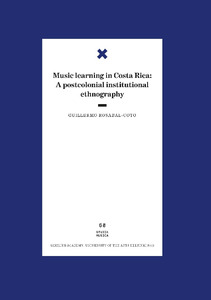 The purpose of this sociological, music education ethnography was to analyze how music learning is organized in postcolonial Costa Rica, through the experiential stance of nine young music educators. In the ontology of institutional ethnography, known as "a sociology for people", I deemed these educators as experts in what was done in their everyday music learning socialization, as lived and felt in their bodily beings. The disjuncture that emerged in thoughts, actions, and choices, in such socialization, became a site for discovery of social practices. Music learning socialization already has been coordinated by extra local goals or agendas, often foreign to music learners' local worlds. I resorted to Latin American postcolonial theories, which discuss the phenomenon of colonization of the Latin American context, among other things through the concepts of "colonial wound" and "epistemic disobedience". Furthermore, I employed the theories of scholars Small and Freire to establish a framework for understanding the connections between colonization and schooling.

Procedures include interviews, participant observation, and artifact analysis. I collected each participant's voice in a story of lifelong music learning socialization. I analyzed what social actors did, how, and for what purposes, in the stories, using theories and concepts from music education literature. In a second level of analysis, I interwove Latin American postcolonial thinking with institutional ethnography in a model of micro/macro relationships in music learning socialization that I call "postcolonial institutional ethnographic analysis" (PCIE). According to the first phase of analysis, the participants engage in music learning socialization in formal and informal settings, from what is familiar to their ways to be in the world. In addition, what is done and how, and for what purposes, is contingent on the interactional-based experiences of all participating social actors, such as their values, background, upbringing, or past education. However, a latent puzzle emerges in the music learners' actualities, when those in control of knowledge or resources - parents, peers, teachers, or authorities - coerce them to give up or modify their local ways to engage with music, causing dislocation. The analysis through the PCIE model allowed me to establish connections between such puzzle and translocal structures that have shaped music education in Costa Rica. I mapped relationships of coordination between notions and practices that mediate music learning in the participants' local worlds, and extra local, social control.

Findings suggest that music learners might be constructed as inferior, illegitimate others, when social actors articulate the following notions, previously established by colonialist structures, such as government, education, or market: (a) the wrong traits or identity, (b) insufficient material or financial resources, (c) insufficient corporeal ability, and (d) insufficient Western Art Music background. Such construction can be understood through the theoretical framework established in this thesis, suggesting that music learners are socialized to become cultivated, Western Art musicians, modern and civilized citizens, or labor force for the developed global market. Learners may either embrace the oppressed site or resist it. The construction of this inferior other can be understood as proceeding from the coloniality that sustained the control and subjugation of the bodies and imaginary of the Amerindian peoples five centuries ago. It is based on the stereotype of the cultural superiority of the European ideal of progress and civilization and as sustaining the transmission of an imagined, White, European, Enlightenment-based Costa Rican national identity, through art music and music schooling, beginning in the 19th century. These ideas endure in contemporary times, in the form of a development discourse that organizes formal music learning that caters to interests of the global market. Post-research reflections suggest that PCIE is useful to decolonize macro-based constructs, theories, traditions, and practices in music learning and music education research, that make invisible or colonize learners' empirical, interactional worlds, as they experience them.