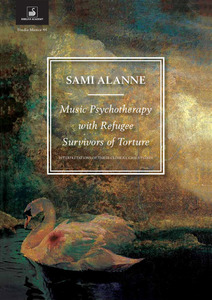 The clinical data for this research were derived from three music psychotherapy cases of torture victims who in 2002 to 2004 lived as either asylum seekers or refugees in Finland. The patients were all traumatized men, originating from Central Africa, South Asia, and the Middle East, who received music therapy sessions as part of their rehabilitation. Music therapy was offered weekly or bi-monthly for the duration of one to two years. Music listening techniques, such as projective listening, guided imagery, and free association were applied in a psychoanalytic frame of reference. Data included 116 automatically audio recorded and transcribed therapy sessions, totalling over 100 hours of real time data that were both qualitatively and quantitatively analyzed by the researcher. While previous studies have examined refugees and other trauma sufferers, and some articles have even discussed music therapy among torture survivors, this is one of the first empirical research studies of music therapy specifically among patients who are survivors of torture.

The research thoroughly describes each of the three subjects in terms of their experiences relating to music, therapy, torture and encounters with Finland, as well as their progression through the therapy. The narrative of each case study makes frequent reference to transcribed data from the music therapy sessions to provide a naturalistic view of the patients and their experiences. Transcribed discourse and clinical notes from all 116 therapy sessions were analyzed in terms of 66 variables of the "situated person" pre-identified as significant according to both the pilot study and previous theory and research in this area. Within each session, the frequency and temporal location in which these variables appeared were systematically recorded and later factor analyzed for reformulating and reducing the dimensions of the data to achieve new meanings. From the analysis, 8 statistically significant factors emerged, suggesting explanations that, in terms of these particular variables, music therapy approaches were effective for promoting verbalization as well as regulation and expression of emotions.

The subjects also completed four tests on multiple occasions: (1) Beck Depression Inventory (BDI), (2) Symptom Check List-25 (SCL-25), (3) How Do You Feel Today? questionnaire, and (4) Alanne Music Therapy Outcome Questionnaire. All four tests were administered at the start of the therapy, at the end of the therapy, and six months following the conclusion of therapy sessions (for a total of three times), and two of the tests (Alanne Music Therapy Outcome Questionnaire and How Do You Feel Today?) were also administered one additional time 6 months into the therapy sessions. Three patients in music psychotherapy and their two compared persons of torture survivors who had the best other general psychiatric treatment filled the questionnaire similarly (N=5). Their general rehabilitation was followed for a two-year period with the questionnaires. According to the data analysis from clinical discourse and tests, all three subjects responded positively and demonstrated some improvement due to their music therapy treatment, although with varying degrees of satisfaction. The therapy increased the consciousness of patients regarding their traumatic experiences, however music was perceived as related to positive imagery and pleasurable experiences, and as an aid in calming and relaxation. These findings suggest that some music psychotherapy methods may be effective in treating patients who are survivors of torture and related traumatic experiences.