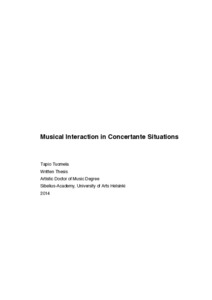 This written thesis forms a part of an artistic doctoral degree and consists of an introduction and three written articles. They all shed light on musical interaction in my own music in three different contexts: between soloist and orchestra, between music and text, and between music and moving images.
The article Musical Interaction in Concertante Situations observes and com-pares musical interaction between the soloist and the orchestra in two of my concertos, the Piano Concerto (2008) and Swap (Chamber Concerto for Saxophone and Orchestra; 2012/13). It focuses on the roles of the soloist and the orchestra, their mutual balance and its development. The mutual hierarchy is examined in terms of which one of the participants may be experienced ei-ther as leading or accompanying in a given passage. The hierarchy depends on a combination of constantly changing parameters, and finally the orchestral texture seems to take the central position in affecting the foreground-background balance between the soloist and the orchestra.

My strong interest in vocal text articulation and languages resulted in a series of compositions called Song Pairs (2007-2012), in which the central idea is to present two compositional interpretations of the same poem within one work, first in its original language and then in a translation. During the project, the language versions became more and more independent from one another, until in one of the song pairs, I set deliberately different music to the two language versions of the same poem. The article Halkeama (in English: Fissure) focuses on interaction between voice and accompaniment in the Song Pairs cycle, and the analysis uses linguistic and semiotic terminology. I found that the instrumental accompaniment was both intuitively and consciously the major tool in interpreting and representing the semantic meaning of the poems and their translations.

The article Tunteiden tulkki (in English: Interpreter of Emotions), treats the interaction between moving images and music. It describes ways a composer may affect the interpretation of a mute film. It is based on orchestral music I composed for the mute film Noidan kirot (Curse of the Sorcerer, 1927). The conceptual background for the analysis was derived from Zofia Lissa's categories of film music functions, of which two (commenting on the images and supporting their emotional content) became the most important ones. When composing, I labelled certain emotions with respective music – regardless of the person experiencing them on the screen. This way the music built bridges between scenes and participated in the construction of the form of the film.