Navigating (un)popular music in the classroom : censure and censorship in an inclusive, democratic music education 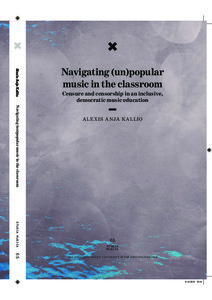 Popular music has often been promoted as an accessible, readily intelligible, engaging, authentic medium for young music students. Including a variety of popular musics in school lessons has also been regarded as a more relevant approach to teaching young people, establishing a continuum between school activities, and their musical worlds beyond classroom walls. In this way, these musics have been seen as particularly democratic, in the sense that they offer all students equal opportunities to participate in a hands-on approach to music-making in the classroom. However, a number of researchers have noted that many popular musics exist in apparent contrast with the aims and values of formal education. This raises questions regarding how school music teachers decide which of these musics to include as part of, and which to exclude from, school repertoires. Moreover, if adolescents construct individual identities and social groupings in relation to, and through, music, excluding certain popular musics from the school classroom as offensive or inappropriate may send students the message that 'your music is not welcome in school, and accordingly, neither are you'.

This dissertation is a synthesizing text, drawing together and expanding upon research reported in four refereed, international journal articles. Assuming an interdisciplinary approach, this research combines the fields of music education and cultural criminology, as a means to understand the processes by which certain musics are excluded from school contexts. The social conflicts and negotiations of meaning by which certain popular musics are stigmatized are understood as processes of social censure, that is, the social interactions and ideological negotiations that construct certain musics as problematic. In turn, judgements and assessments of musical value provide frames and constraints for teacher decisions and actions. These frames may be seen as censorship processes that simultaneously legitimize certain musics through the reinforcement of moral boundaries, and delegitimize others, deeming them inappropriate. Adopting a theoretical lens incorporating Deweyan pragmatism, cultural criminological theories of deviance and critical pedagogy, this research discusses the implications of the processes of social censure and censorship for the ideals of inclusion and democracy in schools.

Designed as a multiple, instrumental case study, data was collected through semi-structured interviews with five Finnish secondary school music teachers, and through the writing and sharing of four factional stories, a methodological tool developed during the research process. Data was approached through the analysis of narratives, emphasizing the close connections between the interview data, and emerging thematic classifications. The findings of this research suggest that in selecting popular repertoire for their students, teachers navigate what I term the school censorship frame: broad and specific social narratives that draw associations between particular musics or songs and socially constructed notions of deviance. Guided by these censorious narratives in making decisions regarding a music's inclusion or exclusion from classroom repertoires, teachers also identified four aspects of popular music that were considered in understanding the social censure of certain musics: lyrics, imagery, mood and emotional affect. It was found that in navigating the narratives of the school censorship frame, and attending to the aspects of popular music that raised or highlighted concerns, teachers could not rely upon a stable ethical framework in classifying popular musics as prudent or problematic. Rather, each student, each music and each situation required a (re)definition of the good, entailing a situational moral deliberation.

This dissertation argues that if schools are envisioned as fully participatory spaces, music classrooms are inherently diverse. Accordingly, the sometimes uncomfortable tensions and disagreements that accompany this diversity may be regarded as resources for inclusive, democratic practices in music education, rather than as a hindrance. Through recognizing, reflecting upon and engaging with the political processes of legitimation and exclusion in popular repertoire selection, new possibilities and promises are presented whereby teachers and students may learn beyond bias and assumption, engage in collaborative critical inquiry and interrogate who music education serves, when, why, how and to what ends.