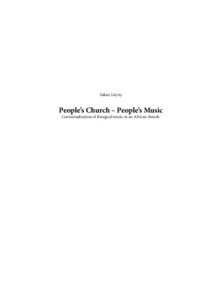 The objective of this research project in the Development Study Program of the Sibelius Academy is to create new contextualized liturgical music in an African church by combining ethnomusicological knowledge on Namibian indigenous and contemporary music with a theological understanding of liturgy. These elements were modified with creative artistic input, and as an outcome a liturgical entity titled The Namibian Mass was produced in both written and audible formats.

This project involves an ethnomusicological study on northern Namibian music cultures and their interaction with European missionaries as well as the musical phenomena born out of this encounter. The operational ground of the study is the Evangelical Lutheran Church in Namibia, ELCIN, its music and the various ethnic groups that constitute its membership.
The theological principles are based on contextualization and inculturation theories and the methodological recommendations of the Lutheran World Federation Nairobi Statement on
Worship and Cultures in 1996.

The existing church music of ELCIN is based mostly on imported repertoires, but enriched and influenced over time by local music. Upon arrival of the missionaries, local cultural music was regarded 'pagan,' having foreign religious connotations contradicting Christianity and therefore not proper for the church. As a result the cultural music and musicians were ignored and in some cases despised by the church. Through assimilation, however, some elements and characteristics of local music were acquired gradually in church music. In the postcolonial era the growing awareness of African identity as well as new paradigms of Namibian theology support dialectic interrelations between local culture and Christianity. This research project posits a theory that culturally, as well as from the perspective of Christianity, local music still provides a viable source for creating new liturgical music in Namibia.

Two experiments on liturgical renewal, namely the new liturgical melodies of ELCIN and the Ongumbiro Ecumenical Service compiled from Namibian ethnic music, were researched,and the methods of making worship music more relevant in a continuous dialogue with the local culture were applied in practice. Reference was made to sister churches in the neighboring countries of Botswana and Angola as well as the Evangelical Lutheran Church in Senegal. Through modification and artistic musical arrangements it was possible to create new liturgical music by utilizing the incorporation of indigenous music and instruments in worship.

This research project consists of an ethnomusicological study, including a written report on the making of new liturgical music, and an artistic production named The Namibian Mass.
The project combines artistic and scientific research methods, while the emphasis is scientific.