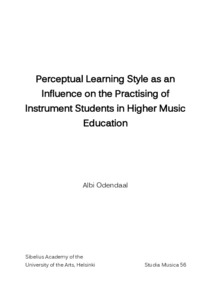 This thesis reports an investigation of the applicability of the theory of perceptual learning style to the practising of Western Classical instrument students in higher music education. Perceptual learning style claims that it is possible to differentiate between individuals on the basis of their preference for gathering information through one of three sensory modality channels: visual, auditory or kinaesthetic. The application of these claims to musical learning is shown to be problematic through two studies that are described in the thesis.

The second study observed six pianists as they practised two stylistically different works of their own selection, and interviewed them using stimulated recall immediately after each observation session. Two observations were made for each work at different stages of its development. The range of practising behaviours of each pianist identified in the four observation sessions and interviews was compared with that of the other pianists. Thirteen groups of behaviours were identified that participants could be differentiated on. These included the use of recordings and self-recordings, vocalisation, use of a metronome, writing on the score, reliance on the score, visual memory, regular movements while playing and not playing, expressive or non-regular movements while playing and not playing, hands separate practice and simplifying or varying aspects of the music. Very few of these groups of behaviours allowed the possibility to be used as a means of identifying perceptual learning style theory, and where individuals behaved in ways that the theory predicts in one group, they did not also do this in other groups. Perceptual learning style was concluded to have very little influence on the practising behaviours and strategies of the participants. Instead, the influence of teachers on strategy selection was highlighted.

The two studies presented in the thesis therefore do not offer support for the claim that perceptual learning style influences the practising behaviours and strategies of the respondents and participants of this study. Several flaws in the conceptualisation of the theory are pointed out in a review of the literature, including: the conception of separate, clearly defined modalities; the ideal of matching instruction; and the use of learning style identification instruments. The results of the study point to a further problem with the conceptualisation of perceptual learning style as stable and inherent, and argues, in the light of findings that the theory influences the learning of young children, that instruction in and development of skill play a more important role in the practising behaviours of the participants and respondents in this study.