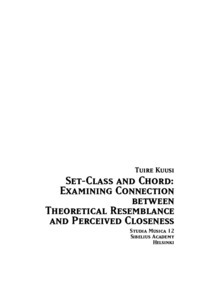 This study examined connections between pitch-class set-theoretical abstract concepts, setclasses, and perceptual estimations of chords derived from the set-classes. The study had two aims, the first of which was to compare theoretical resemblance with perceived closeness. Another aim was to illuminate and analyze both factors relevant for perceptual estimations of chords and factors relevant for theoretical resemblance.

The study also analyzed a selection of theoretical resemblance models. The models were so-called similarity measures. Statistical analyses of distributions of values produced by these measures were made. It turned out that the values produced by different measures could not be compared with one another because the distributions of values differed so much from one measure to another. Hence, the values were modified into percentiles.

In the empirical part of the study, pentachords derived from pentad classes were used. Closeness between pentachords was rated by subjects. The subjects also rated the pentachords one at a time on nine semantic scales. The subjects' closeness ratings were compared with similarity values as percentiles calculated by nine pitch-class set-theoretical similarity measures. A rather high connection was found between theoretical set-class similarity and aurally estimated chordal closeness.

The underlying factors guiding perceptual estimations of chords were examined. The methods used were multidimensional scaling, hierarchical clustering, and factor analysis. The first (and the most important) factor guiding perception of both chord pairs and single chords was the degree of consonance of the test chords, which could also be explained by theoretical consonance models. Another factor was the chords' association with some traditional tonal chord. The chords' association with the whole-tone collection was the third factor guiding closeness ratings, while the combination of the width and register of the chords was the third factor guiding single-chord ratings. An additional factor guiding closeness ratings was the number of common pitches between two chords.

To examine the connection between set-classes and perceptual estimations of chords, the factors found in the analyses were compared with set-class properties (such as the intervalclass content and the subset-class content). It was found that the factors were, to a rather high degree, bound to the properties of the set-classes from which the chords were derived. Only the width and register of chords seemed to operate independently from set-classes.

The factors relevant for theoretical set-class similarity were also examined. Datasets produced by nine similarity measures were analyzed by multidimensional scaling. The three factors that emerged in the analyses were interpreted by (near)chromatic property, pentatonic property, and whole-tone property of the set-classes. Of these, the first and third factors were closely connected with the first and third factors that were found to guide closeness ratings. An additional factor relevant for theoretical set-class similarity was the cardinality of the largest mutually embeddable subset-class of the two set-classes of a pair.

In this study a connection was found between theoretical resemblance and perceived closeness as well as between set-class properties and perception of chords. The results of the study can be interpreted to indicate that the abstract properties of set-classes (which are quantitative) had an effect on the qualitative characteristics of chords derived from them, and these qualitative chordal characteristics had effects on the subjects' estimations.