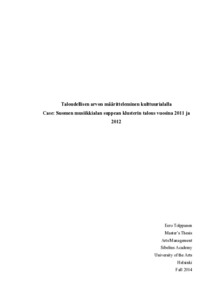 Traditional industries have had their total economic value measured accurately for a long time but industries in the cultural fields are still struggling to have precise economic indicators. This is, in part, because cultural values are often seen in juxtaposition to economic realities and reliable data about actual numbers is hard to come about. This thesis aims to tackle this situation by studying the Finnish music industry with the aim to find out its the total value.

Music industry and its functioning has been widely studied and there are numerous approaches the phenomenon and its structure. This study elaborates on an analytical model that examines the industry from a cluster perspective where the narrow cluster consists of actors in three separate but interlinked sectors: the musical works, recordings and live music sector, generating the major part of their revenue from pure music products and services. The revenues form three separate streams based on their source: sales of recordings or streaming, copyright royalties and live music revenues which together, after deducting overlapping revenues, count as the total value of the narrow cluster.

Applying the analytical model to the Finnish music industry for the years 2011 and 2012 the revenue streams are studied and numerical data is gathered largely from pre-existing sources such as annual reports and statistics, complimented with expert interviews when necessary. Where readily applicable data is not available, mathematical methods are used to generate an estimate of the revenue stream. Based on the study, the total value is finally determined to be 473,7 million euros and 487 million euros respectively with a growth rate of 2,1 percent and live music revenue stream forming approximately 70 percent of the total. Based on the application, the model serves as a sufficient method to determine the total value of the music industry annually due to its simplicity but as data on certain revenue streams is not available and due to the estimating nature of the mathematical methods used, the model is not completely accurate and hence cannot be considered as the definite approach but rather another tool to tackle the subject.