The Berlin Philharmonic : culture and leadership 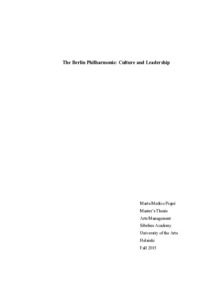 This thesis investigates the organisational culture of the Berlin Philharmonic and its leadership structure. It highlights the symbiotic relationship of these two aspects and shows how the organisational culture and leadership are influenced by each other. The study focus on the period 2002 – 2015, which features Sir Simon Rattle as artistic director and chief conductor.
Due to the focus of this research in the Berlin Philharmonic, an intrinsic case study is the chosen research method and the research approach is qualitative. The data collection method that has been used is document data from printed and audio-visual material. Content analysis is the technique used for the data analysis.
The results of the analysis present the different characteristics of the organisational culture, the shared leadership system of the orchestra and the characteristics of its artistic director as a leader. The relationship between the artistic director and the musicians is key to understand the co-creation of leadership through the self-governing system. The self-governing system of the orchestra is the cornerstone of the symbiotic relationship between leadership and organisational culture because it stands for both a cultural value and a tool for leadership.
This study contributes to two important theoretical discussions. On the one hand, research on self-managing teams of creative professionals and the kind of leadership they require. On the other hand, research on symphony orchestras and conductors, which is extensive in many different areas but it currently lacks investigation of self-managing orchestras.