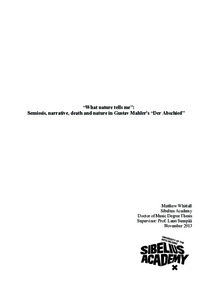 This study takes as its subject the idea of nature in the music of Gustav Mahler, and how this extramusical concept can be said to manifest in Mahler's works. The focus of the study is a multi- faceted analysis of the final movement of the 1908 song symphony Das Lied von der Erde, the epic song "Der Abschied" ("The Farewell"). The analysis explores aspects of nature in relation to their semiotic manifestations in the structure of the music, in which semiotic signs of nature in the music are arranged hierarchically according to the degree of specificity of extramusical reference (concrete or abstract), as well as according to the type of fundamental temporal motion, static or linear, giving rise to them. This semiosis of nature is examined for its relation to the Romantic narrative archetype Mahler employs for the work, that of the human protagonist venturing into nature, and seeks to posit a semiotic identity within that narrative for the two types of temporal motion. The narrative analysis is based on the song text, which was adapted from Hans Bethge's 1907 poetry collection Chinesische Flöte ("The Chinese Flute"), and in whose particulars place "Der Abschied" more broadly within the nineteenth-century Lied cycle tradition. Topics in the textual discussion feature Mahler's redactions to the original Bethge poems chosen for "Der Abschied", the origins of the texts in ancient Chinese poetry, and the role of Eastern thought in revitalizing a common Western textual narrative. Subsidiary ideas explored include the idea of nature as popular cultural construct in nineteenth-century central European society; the role of death as a mediating act between human and nature; the historical formation and perpetuation of a standard critical reception of "Der Abschied" in the field of Mahler scholarship; the treatment of musical topic as an act of parody; the role of Mahler as composer-individual within the narrative of the work; the evolution of the protagonist-in-nature narrative over Mahler's career, as compared with the early song cycle Lieder Eines Fahrenden Gesellen, and the dissolution of conceptual polarities in the creation of a new type of rhetorical synthesis. The aim of the study is ultimately to posit a revised, contemporary reading of "Der Abschied" that eschews the heavy biographical emphasis of much existing analysis of the work in favor of evidence from the substance of the music, as well as to reframe the debate regarding the work's significance for Mahler personally in terms of it being a compositional and narrative problem rather than a strictly biographical confession.