Zeze - a Tanzanian fiddle : an empirical research of the history, structure, and playing of wagogo's and waha's zeze 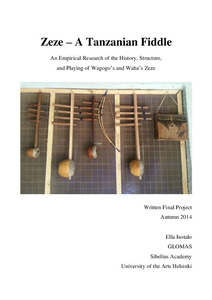 The aim of this thesis was to carry out research into the traditional Tanzanian fiddle, or Zeze as it is called in Tanzania. The researcher investigates building and playing techniques, as well as some of the musical traditions connected to the instrument.

I, Ella Isotalo, am a folk musician, and my main instruments are violin and jouhikko (the Finnish bowed lyre). I became interested in the Tanzanian zeze during my first stay in Tanzania as an exchange student in 2012. During my second trip, in 2014, I focused on collecting detailed information on the instrument, which is presented in this paper.

The paper is divided into four main areas of focus:

2. A brief presentation of various African one-string fiddles, followed by more detailed information on the zezes of two Tanzanian ethic groups, namely the Wagogo and Waha people. There are numerous differences between the various types of zezes, including the materials they are made from, the number of the strings and the structure of the bow. Tanzania is a vast country and materials vary
greatly in different parts of the country, which also has an affect on the instruments. The Wagogo people's bow is traditionally a stick, whereas the Waha people make their bow from a bent stick with sisal fiber hair, for example.

3. A step-by-step instruction manual, including pictures documenting the process of building one variety of Tanzanian four-string zeze. This is based on a model by renowned Tanzanian musician, Hukwe Zawose. (1940-2003).

4. This section includes information on playing techniques, tunings and examples of the music of the Wagogo and Waha ethnic groups, with attached photographs, audio and video examples.

The world is changing rapidly and Tanzania cannot help but be part of this change. Everyday life is very different from what it was just some years ago. This thing called progress has profound affects on music and the role of traditional instruments.

Playing music is not an integral part of life anymore, at least not in the way it used to be, and the function of the instruments has changed dramatically. For example, the zeze is no longer used by a shepherd as a solo instrument solely for his own entertainment, but can nowadays be played together with other instruments and be a part of an ensemble.