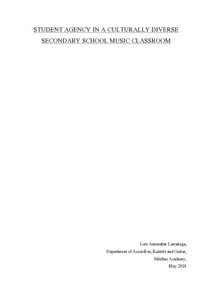 Students´ musical agency is a musical process whereby students act and interact. Musical agency
plays an important role in a culturally diverse classroom; but how do educators foster student
agency in such diverse settings? What repertoire and class activities do they use? To address these
questions, three experienced music teachers from Vantaa, Espoo and Helsinki were interviewed.
This paper is based on the concepts of Musical Agency (Karlsen, 2014; Klemenčič, 2015) and
Democracy (Dewey, 2016; Karlsen & Westerlund, 2010). Findings show that pupils are more
interested in working with pop songs than music from their own culture and that teachers tend to
choose easy repertoire for pupils whose musical knowledge is not well developed and their talent
not yet realised.