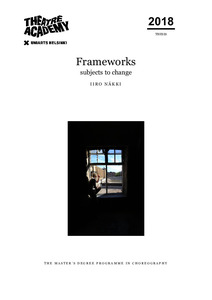 This written thesis is an analysis of my artistic thesis work provide from 2017. The thesis outlines a multiplicity of frameworks included in the making of provide and situates those frameworks into wider discourses. In doing so, the thesis presents the analysis of one’s own artistic work as a form of self-reflection that both generates understanding and, simultaneously, re-structures the original artistic work. The oldest included parts of this thesis were written in May 2017, the most recent chapters being from March 2018. The structure of the thesis starts from the most recent, moving towards the oldest: the text proposes a return towards its initiative. However, this flow of time is not exact. Old chapters have been re-written and more recent chapters have been built on some of the very first texts. Through its structure, this thesis presents its own writing process as one of continuous re-writing, reflecting the artistic process of its analysis. Both this thesis and the artistic thesis work provide are then similar in that they both contain a possibility to pay attention to the complexity of time and to address the transformation from a place to another. They both try to contextualise their situation, and to understand the frameworks they operate in and through. These frameworks are presented as a fragmentary, yet creating coherence in their interconnections. In the first section Themes, Methods, Interests I open up two central interests of provide and this analysis: the process of artistic creation as building a place for choreographic work to appear in, and acts of re-enactment as a means to research ideological realms of text or performance. The first of these interests I discuss alongside texts of Edward S. Casey and Marc Augé. The latter I discuss through all the artistic creations realized during my MA studies in the programme of choreography. In the middle section I discuss provide concentrating on spatiality and score. I attempt to situate the piece in the
genealogy of installation art and to depict the dramaturgical whole of the performance in relation to the spectator alongside texts of Claire Bishop, Kirsten Maar and Christian Teckert. I also decompose the work to present its segments one at a time. Towards the end of this thesis, I open the thought context of the work, building on William Forsythe and Hans-Georg Gadamer. The text is concluded with a “speculative preface” written before starting to work on provide.