"Becoming" through artistic immersion : the Bayanihan in Helsinki 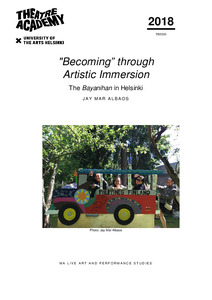 Migrant Filipinos are neither here nor there. It is from this blurry position where I drew inspiration for my research. Migration is more than just a physical movement; it also involves the creation and recreation of spaces and destinations. The state of precarity that migrants belong to makes them an interesting group of people to study with. Departing from the nuanced collaborative piece of Bayanihan, my research focuses on the question: How did the Filipino labor migrants perform 'becoming' during the Bayanihan 2017 in Helsinki? This research aims to contribute, if not to widen, the discourse on migration not only as political and/or economic occurrence but also as a performative phenomenon. The research introduced artistic immersion as a method of doing community work. Ethnography was the initial methodological foundation of my research, but its tenets were limiting the depth of that which I wanted to capture. Hence, I introduced the notion of artistic immersion, which is based on recognition, inclusivity, and participation. Artistic immersion challenges the notion of 'interpretation' and stresses the importance of recognition. By doing so, we not only arrive merely at an understanding, but a recognition of those who are in the peripheries and, hopefully, eventually nurture inclusive coexistence. The thesis surveyed how 'becoming' happened in different, yet almost simultaneous, nuanced vectors. The process of 'becoming' became reliant to the human, ecological, political, and geographical environments it was into. It also touched many layers of theoretical concepts like performativity, place and site, reconstituting, to mention a few. Through Bayanihan, I realized that 'becoming' was momentary. Materially, it was constructed and eventually got destroyed in a span of time or days. Such momentariness of existence strongly relates to that of labor migrants. The precariousness of their situation suggests that one day they might lose their grant to stay and work in a foreign land. The thesis also included feedback from the participants of the artistic immersion and Bayanihan. This showed how the project treaded along the hazy act of collaboration by deploying recognition. In many ways, the work should not be solely credited to the author alone but also to the body-minds who made the process and project possible. Finally, it is proper to state that as much as problems arise in community work, so was in artistic immersion and Bayanihan. Communities and/or groups constantly change and adapt to dynamic environments. Artistic immersion itself is not finite and is subject to changes. Further assessments on its ideological implications, especially in different contexts, is encouraged. Bayanihan and artistic immersion, reveal so much how humans perform complex relationships (towards each other, institutions, identities, and so on).