Comic trans : presenting and representing the other in stand-up comedy 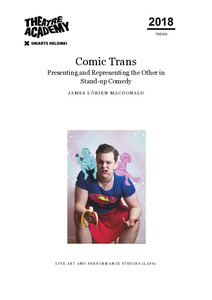 This thesis is a companion to my artistic work in stand-up comedy, comprising artistic-based research and approaches comedy from a performance studies perspective. The question addressed in the paper and the work is "How is the body of the comedian part of the joke?" The first section outlines dominant theories about humour-superiority, relief, and incongruity-as a background the discussion. It touches on the role of the comedian both as untrustworthy, playful trickster, and parrhesiastes who speaks directly to power, backed by the truth of her lived experience. It also provides some context for the contemporary comedian, whose work follows them off stage and into the thunderdome of social media, where trolling and speaking truth are taken very seriously. Another section presented as background to the discussion is on transgender bodies in performance, focusing on performance art and in stand-up comedy.
I argue that embodied transgender performances are largely still situated in the act of encountering a trans body. Speaking of contemporary stand-up comedy, I discuss the ways in which an abject identity or body may be exploited by the comedian onstage for laughter and also for activism.
The comedy of Tig Notaro, Maria Bamford, Hasan Minaj, Jess Thom, Eddie Izzard, Dave Chappelle, Cameron Esposito, and others come into play. Comedy is a complex and interesting site of resistance and social change, since it deals in mockery and non-seriousness, but precisely these qualities allow it to convey messages that are necessary and not polite elsewhere.
Finally, I describe my final artistic work, a one-hour comedy show called Gender Euphoria, which is about my own experiences in transitioning from female to male. I describe the ways in which the space and experience were designed to mimic the conditions of a stand-up club inside an institution of learning, and to what aim. The arc of Gender Euphoria is described as an autobiographical work of discovering identity, encountering medical institutions with that identity, encountering new social norms, and travelling through wave after wave of certainty in identity towards more complication, ambiguity, and liberation. I also discuss the material that I was too afraid to do, or that I self-censored out of a sense of not being able to convey the message properly, and fear of backlash from a community I attempt to support. As a whole, this thesis attempts to provide a viewpoint towards the playful and serious contradictions in stand-up comedy, in a way that is informed by practice in the field, from the point of view of a subject whose identity has up until recently been the object of derision, rather than the subject of resistance.