Performing hatred : or hate speech as a performance 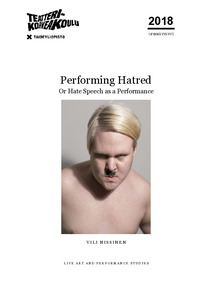 This thesis analyzes hate speech from a performance studies perspective. The theoretical aim is not to justify hate speech, but rather to deconstruct it and discuss hate speech asa performance, and how it can be performed through language, prejudices and power relations. I will analyze the dramaturgy of hate speech and its performers, as well as the audience needed in order for this performance to happen. I will also reveal that there is a little racism inside us all. We can either let it take control over us, or we can try to deal with it and silence it when possible. In this thesis, I refer to this phenomena as the Charm of the Black Sun. Along with these theoretical issues, I'm also writing critically about my artistic thesis Vihapuhenäytelmä 2015 (Hate Speech Play). The style of this thesis is mostly autobiographical and the primary theoretical framework comes from the Cultural studies tradition from such writer as Sara Ahmed, Hannah Arendt, Judith Butler and Slavoj Zizek. Approaching hate speech as a performance in a theoretical view is a new approach to the issue. When observing hate speech through the performance studies lenses, we will find a performative, stating that someone is something, with a purpose of hurting the target. The symbolic violence of hate speech works through language: hateful language simplifies the target violently as a single feature containing our expectations and visions of the object. The linguistic injury, as Judith Butler puts it, can also build social constructions. The aim of the expression is many times intended to situate the target in a subordinate position against the speaker. The performative aspects of hate don't work only on the linguistic level, but also on a non-verbal symbolic level: different gestures and visual messages (such as a burning cross) deliver the same hateful messages.