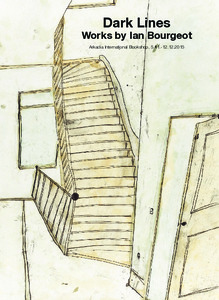 This Master’s Thesis consists of two parts: the exhibition Dark Lines. Works by Ian Bourgeot (5.11.-12.12.2015) and the written component under the same name. In the written part, which can rather be called an essayistic documentation, I go through the events and initial considerations leading to making the exhibition, its goals and the outcome. Dark Lines was the first occurrence when Ian Bourgeot’s drawings were presented to the public, although he has been producing artworks during his entire adult life. Arkadia International Bookshop - a second-hand bookstore owned and run by Ian Bourgeot and his wife Liisa Bourgeot - was chosen quite naturally as the exhibition venue. Although Bourgeot’s works exist in abundance, only a small number of them was eventually included in the exhibition, the main part of which was made up of his latest drawings (2014- 2015). However, several of the selected works dated back to 2005. The written part is based mainly on my personal experience of discovering Ian Bourgeot’s art. I elaborate on how I became interested in his drawings, introduce Bourgeot as an artist, present some facts from his biography, and explain the underlying principle for the selection of the artworks. I analyse the process of working with the space, which meant, in practice, creating an exhibition inside the existing space of the bookshop. My attention is especially drawn to the meanings attributed to different rooms in Arkadia and the relation that emerged between them and the artworks. I ponder over the idea of the white cube, compare Arkadia with it and think about the meaning of the whole exhibition from this perspective. Finally, I write about the exhibition as a crucial moment for Bourgeot’s further development as an artist, bringing some examples. The process of working on Dark Lines and its written documentation also broadened my understanding of art, and even culture in general. It helped me to better realise the features of curatorial practice as well as my own ways of doing and developing it further in future.