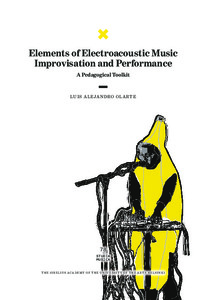 The core application of my research project is a pedagogical package or toolkit for studying and teaching electroacoustic music performance and improvisation. The package consists of a series of units, each of which investigates fundamental concepts or elements of electroacoustic music, sound theory and its performance aspects through improvisational strategies. The two disciplines of electroacoustic music performance and improvisation, have been considered in a combined and holistic manner. Each unit includes musical exercises, performance situations, theoretical discussions and suggested developments designed to systematically address the essential questions of becoming a sound performer integrating electrical means with musical expression. The toolkit is presented within a theoretical framework where the main aspects of the discipline have been studied: listening and improvisation, the contributions of the electroacoustic genre to modern musicianship and a collection of electronic instruments as tools for performance. The toolkit has been developed using a process of qualitative inquiry and action research methodology based on fieldwork with university student groups during more than one thousand hours of workshops over the past five years. The final result is thus a fully integrated skill set compiled in a book. This research is a response to the modern challenges of designing pedagogical content towards the development of performance skills with electronic instruments and audio technology. The main research question leading this work project has been: What are the methods, materials, resources, and strategies required to develop skills in the discipline of Electroacoustic Music Performance and Improvisation? I approached this question by following a combined methodology of action research and deductive-inductive analysis. The deductive-inductive methodology was applied in the following way: an initial hypothetical content of sonic concepts, performance ideas, musical situations and electroacoustic themes was investigated with music students at third-level education (University of the Arts Helsinki) in a series of workshops. Evaluating a hypothesis through fieldwork entailed a deductive process. Accordingly, the research findings were recorded via a process of data collection, which included audiovisual recordings, working notes, personal observations, and verbal or written feedback from the participants. This data was then analyzed and evaluated through a triangulation process with my supervisors, leading to the reformulation of the toolkit's contents. In contrast, the process of inferring the theory and contents of the electroacoustic music performance and improvisation discipline from the collected data was an inductive process. The new contents were then further tested on the field and analyzed until reaching the form presented in this document: twenty one units organized into four sections researching the sonic, electroacoustic, musical and performative foremost aspects or elements of the discipline; a discussion on the related values of improvised sonic performance and three chapters establishing the theoretical framework. The results of this research offer the opportunity to acquire knowledge and understanding of electroacoustic music by performing with the tools of the genre while simultaneously developing improvisation skills through the manipulation of sound technology concepts. Playing with electroacoustic tools must impose no obstacle to the flow of the performer's intuition and musical thinking, and the development of a proper dexterity should be considered a fundamental part of modern musicianship. Whereas performance, improvisation and electroacoustic music are too often treated as distinct disciplines, in this work, these topics are developed and explored in an entirely unified manner. This approach allows the development of a fully integrated skill set in a single, cohesive discipline: Electroacoustic Music Performance and Improvisation. This pedagogical toolkit will grant new generations of students of electroacoustic improvisation access and insight into a unified method and discipline; one might further hope for it to spark new relationships between musicians and technology, or even to stimulate further research in domains such as psychoacoustics, acoustics, electroacoustic lutherie or the philosophy of music education.