Aspects of social and stylistic associations in four works of Mauro Giuliani. 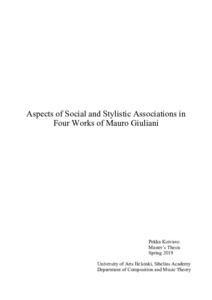 This study investigates the social and aesthetic context in four works of Mauro Giuliani (1781-1829). The study represents the social context for Giuliani's music by introducing the central aspects of Viennese musical life in the late 18th and early 19th centuries. Three social situations that Giuliani's music appears on, are identified: music in public concerts, music in the salon, and music at home. Also, I introduce the aesthetic concept of music intended for connoisseurs and amateurs. The social contexts are mirrored into four works of Giuliani (op. 15, op. 21, op. 30, and op. 44). In the analysis of these works, I intended to find out, in which way does the social context affect the these works; does the music performed in public follow a public musical discourse and does the music performed in private follow a more private presentation, and how much do these two extremes exist within one work. I also wanted to investigate, which kind of stylistic associations these works have; are they intended for amateur or connoisseur public, or both. To investigate this in the works mentioned above, I have used the topic theory to identify the stylistic and social associations of the musical textures used in them. In op. 15 and op. 30, I have created mappings of expressive narrative of the topics used in the work. This mapping is based on Robert Hatten's theory of expressive narrative or expressive genres. In addition to this, formal functions in op. 15 and op. 30 are investigated by using Hepokoski & Darcy's Sonata Theory. Also, in op. 15 and op. 30, the textures and formal structures are mirrored into the 18th century view on sonata- and symphonic styles, which to some extend can answer on which way the works communicate with their audiences in terms of public and private musical discourse. By using these methods, I was able to identify that op. 21 and op. 44 are domestic implications of dance music, a genre originated from public musical discourse. The dances were highly popular music and bore a strong trait of amateurism in them. This is reflected also in Giuliani's works, as they are very simple and follow the conventions of the genre of triple-meter contredanses closely. The sonata op. 15 is a work intended to be performed in salons. The work follows a private musical discourse, as it is built in the sonata style and follows other traits common for chamber music, such as wide range of expressions. The material and structure of the work also hint that the composition leans more towards the connoisseur audiences. The concerto op. 30 is music intended for public, as it is in the concerto genre, which was mainly performed in public. It follows mainly the symphonic style, but also hints the sonata style occasionally. It is also the only work in the study that has contemporary documentation on its public performances. It is a popular work through the genre but because of its extensive use of the military and other topics of high stylistic associations, the work has a dignified general character, which evens the connoisseur and amateur tendencies in the work.