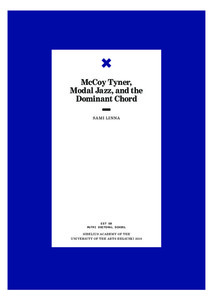 This thesis examines the significance of dominant seventh chords to jazz pianist McCoy Tyner’s style during the 1960s. As a member of the John Coltrane Quartet, Tyner was at the forefront in the emergence of modal jazz. Consequently, scholarly writings and pedagogic materials have looked at Tyner through the modal jazz paradigm, emphasizing scales and quartal harmonies. However, Tyner himself has brought up the use of dominant seventh chords as one of the characteristics of his style, as well as his expression being rooted in bebop.

The source material for this analysis consists of audio recordings, audiovisual materials, books, scholarly articles and dissertations, magazine articles, and internet sources. The presented musical examples were chosen from the material transcribed by the author, including 29 complete and 34 partial transcriptions of McCoy Tyner’s solos, along with transcriptions of Tyner’s accompaniment and compositions. Melodic lines and chord voicings are analyzed in relationship to other similar examples from Tyner’s recorded output and connections between Tyner’s early style and his later recordings are brought out. In sections where they are most relevant, and in order to musically contextualize Tyner’s piano parts, the contributions of his fellow musicians have been notated.

The findings show that McCoy Tyner’s style evolved throughout the 1960s with new elements added continuously. Tyner achieves a wide variety of sounds by placing dominant chords over a primary bass pitch and by combining scale-based melodic ideas with free movement of parallel dominant chords. He frequently utilizes functional chord progressions to create movement and to resolve phrases in modal contexts. The independence between the left-hand harmonies and the right-hand melodies is a key factor in Tyner’s way of dealing with tension and release. The musical examples transcribed from the recordings of the John Coltrane Quartet shed new light on the definitions of modal jazz itself.