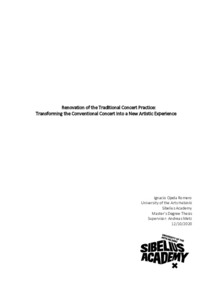 In this paper, the author tries to address the huge divide between the classical music world and its institutions from a potential audience who is culturally interested but also engaged with other artforms which place their focus on the present. Based on the premise that academic music institutions, and specifically, its traditional concert experience, do not address the concerns of a society living in the twenty-first century, but instead are deeply rooted in ideological, cultural and logistical mechanisms of the nineteenth century, the author proposes ideas on how to modernize traditional concert practice. He suggests severing some ties with traditions that keep audiences from relating to academic concerts and to reconceptualize the way in which classical musicians and audiences view the experience of the concert. To that end, the author starts by contrasting in a narrative tone the vastly different experiences of the classical concert and the rock festival, so he can later expose the contradictions inherent in the classical music paradigm, which is rapidly leading to a decline in ticket sales. In the second part of the paper, the author reflects on how to change the downward trend the music business is experiencing. He concludes that it is in the reevaluation of the format and the content of the concert practice that potential audiences would be drawn to academic music concerts.