The Issue of Size: A Glimpse into the History of the Violoncello Piccolo 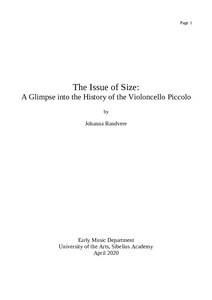 The aim of this research is to find out whether, how and why the size, tuning and the number of
strings of the cello in the 17th and 18th centuries varied. There are multiple reasons to believe that
the instrument we now recognize as a cello has not always been as clearly defined as now. There
are written theoretical sources, original survived instruments, iconographical sources and cello
music that support the hypothesis that smaller-sized cellos – violoncelli piccoli – were commonly
used among string players of Europe in the Baroque era. The musical examples in this paper are
based on my own experience as a cellist and viol player. The research is historically informed (HIP)
and theoretically based on treatises concerning instruments from the 17th and the 18th centuries as
well as articles by colleagues around the world. In the first part of this paper I will concentrate on
the history of the cello, possible reasons for its varying dimensions and how the size of the cello
affects playing it. Because this article is quite cello-specific, I have included a chapter concerning
technical vocabulary in order to make my text more understandable also for those who are not
acquainted with string instruments. In applying these findings to the music written for the piccolo,
the second part of the article focuses on the music of Johann Sebastian Bach, namely cantatas with
obbligato piccolo part, Cello Suite No. 6 in D Major, and Luigi Boccherini’s cello sonatas. The key
questions are the following: first, is there a relevant organological difference among the instruments
Bach used for performance of these compositions? Second, what precisely was Bach's violoncello,
and how does the 'piccolo' modifier relate to it? Finally, do range, use, and specific clefs clearly
enough suggest one instrument over another, when no specifications appear in the score?