Ality : inhabiting the virtual through choreographic practice and research 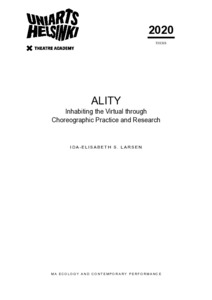 In relation to the traditional expression of the term choreography, the formulation of movement appears to be something that the choreographer as an activating agent sets into motion. In this thesis, I will illustrate a transformation in my own reasoning around that concept and present the three terms choreographer, choreographic object, Movement as Constant Condition (MCC) and their reciprocal relationship. Through an evolution of my own research and practice, I will show how I have come to understand that if either choreographic object, choreographer or a prevailing concept of movement change, then the other two must undergo reformulation too. This thesis will show how these variables have become intrinsically connected to each other in my work, with none having more agency or influence over the other. The argumentation of this paper will use the research and presentations of the collaborative choreographic works of TRANS- (2015) and in particular Ality (2018) as defining models for how the concept of MCC came into fruition,
and then transformed my thinking and influenced my approach to choreographing as well. I will start by illustrating how in the work TRANS- we found the seed from which the idea of MCC grew. I will then show how it became the starting point for the work Ality. This is where the idea of Movement as Constant Condition developed even further through the concept of the virtual
and my studies in the Theatre Academy - University of the Arts Helsinki (TeaK) during MA program in Ecology and Contemporary Performance.