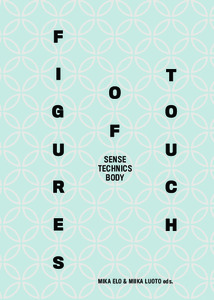 Elo, Mika
Luoto, Miika
The Academy of Fine Arts at the University of the Arts Helsinki

As a sense modality, touch has been both over- and undervalued in Western culture. On the one hand, touch has been regarded as the basis of sense certainty and as a rather normative support to the theoretical gaze. On the other hand, it has been considered as vague, vulgar, drive-related or impure. Due to these contradictory and potentially subversive qualities, touch has been invested with various emancipatory expectations. In its ambivalence, the very sense of touch is essentially over-determined.
The texts of this volume address various dimensions of touch, where touch is not only a matter of sensory experience or bodily capacity, but also one of technics and vulnerability, of exposure and depth, of delicacy and tact. Some of the chapters venture out to the obscure borderlands of the phenomenal world where knowledge-oriented approaches encounter their limits, while others address something we could call generative patterns, or, as the title suggests, “figures of touch”.