Living in the future : revisiting time of roses 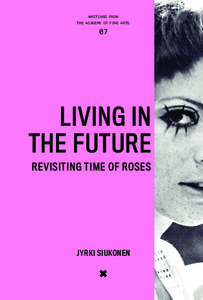 Time of Roses (Ruusujen aika) is a rare flower in the history of Finnish cinema. On its release in February 1969, the urban science fiction film set in the year 2012 was an oddity in a Nordic semi-urban society lacking any tradition in speculative fiction. Fifty years on, as local literature has slowly caught up with the 21st century, Time of Roses still remains the only representative example of serious science fiction film in Finland.

This small book is the first study dedicated to the film and its basic ideas – at least in part. Rather than a survey devoted to the work of the director Risto Jarva (1934–1977), a leading Finnish filmmaker of his generation, the book in your hands is a conjecture about the intellectual and artistic background of Time of Roses.